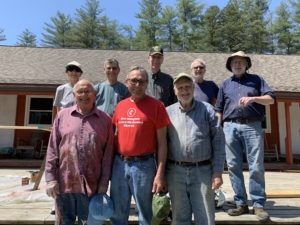 After sufficient coffee and doughnuts, the group met with Scott Seese, the Camp Director, to review the
project details. We worked two different projects.

The second group worked on the tower by lowering the framing for the first upper deck. Before they could do this, they had to clear trees that had fallen down on the trail to the lake so they could get back to the tower. 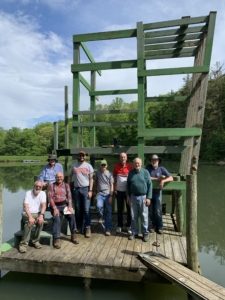 Our group worked on loading up boards to be used in the reconstruction of the tower into the truck so they could be driven to the lake. We also made a couple of trips to haul all the tools, including a generator to run the saw and other power tools. One group worked on cutting boards to the various lengths that were needed in the construction. Another group worked on installing the stringers to be used for the stairs up to the first upper deck. The third group installed joist hangers and then the joists on the first upper deck.  After that they starter laying down the floor. We were interrupted for a short while by rain. When we left, we had the first five steps completed and more than one half of the deck. 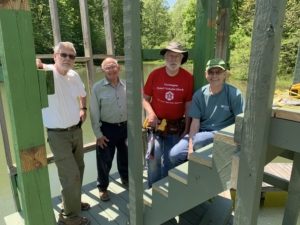 A nice lunch was provided each day by the camp for our group.

If you are interested in joining us on our next adult mission trip, please let us know in the church office!